I am running the latest version of motion 3.2.9 on Linux Ubuntu, and I am trying to view video from my PVR 500 Card. When I try to use motion to get pictures out of this device the pictures come out messed up, also if I try to access the card using any other program to view video it also comes wrong. In a nutshell 1 - I test the video from my PVR Card (before running motion) using a VLC player and it works fine. 2 - Run motion to try extract images from this same card, and even though motion seems to load and works without errors, it shows messed up images. 3 - After I close motion and try to play from the device as in (1) the images come up messed up just like they did in motion. 4 - remove and reload my drive and everything is back to normal until I run motion again. 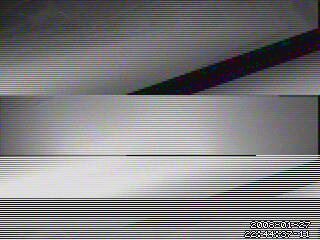 I am at a loss as to what the cause might be, if anyone can hell me that would be great, Thanks

PVR Card support is not up to date , i did a patch against old version : http://www.lavrsen.dk/twiki/bin/view/Motion/MotionWinTVPVRCardSupport Looking your post seems you are already running motion with one of those PVR patch ... motion-3.2.9 released + latest PVR patch ? -- AngelCarpintero - 30 Jan 2008 Thanks for the reply. Yes that is correct I have motion-3.2.9 released + latest PVR patch, I forgot to mention that I also applied the patch. I followed the instruction in a similar link : http://www.lavrsen.dk/twiki/bin/view/Motion/SupportQuestion2007x07x29x084400?rev=11 Before without patch motion would simply fail to start when accesing the PVR card. After the patch was applied I was able to start motion and get an image. The problem now is that all I get is a picture like the attachement. The odd thing is that after I close motion if I try to play from the PVR using a player like VLC I get the same image I get from motion. The only way to reset it is to reload my driver. Thanks, -- FrankHernandez - 31 Jan 2008 Please try to send an email to mailing list to see how many people uses PVR and is interested in help on this issue, it's quite hard to fix an issue developing in "blind" way, even we can guess a patch if after there's no feedback about how is working ... that happened with PVR :-/ I'll update PVR patch to work with motion-3.2.9 though. -- AngelCarpintero - 02 Feb 2008

PVR patch won't be supported unless someone with that kind of card will handle the support. -- AngelCarpintero - 16 Jun 2008

Attachments 1
Edit  | Attach | Print version | History: r6 < r5 < r4 < r3 < r2 | Backlinks | View wiki text | Edit wiki text | More topic actions
Topic revision: r6 - 16 Jun 2008, AngelCarpintero
Motion
Webs
Copyright © 1999-2020 by the contributing authors. All material on this collaboration platform is the property of the contributing authors.
Please do not email Kenneth for support questions (read why). Use the Support Requests page or join the Mailing List.
This website only use harmless session cookies. See Cookie Policy for details. By using this website you accept the use of these cookies.